What You Should Know About
Abnormal Uterine Bleeding

Sixteen-year-old Debbie has unpredictable periods that interfere with her swim team activities. Thirty-two-year-old Marta sometimes has bleeding between her periods. Forty-eight-year-old LaToya has extremely heavy periods. Should any of these women be concerned?

Monthly bleeding throughout the reproductive years (the years when women can become pregnant) is called menstruation, menses, or a period. Menstruation is the final part of a cycle that occurs about once a month, preparing your body for pregnancy. Hormone-producing glands and the reproductive organs they affect—the uterus (womb) and the ovaries—must be working right for each cycle to occur normally. Bleeding that differs from the usual pattern is called abnormal uterine bleeding (AUB).

On day 1 of the menstrual cycle, the day your period begins, levels of the hormone estrogen begin rising and the lining of your uterus starts to grow and thicken. Pituitary gland hormones cause an egg to develop in your ovaries. At .about the middle of the cycle—day 14 if your period comes every 28 days—a hormone surge causes the egg to burst from the ovary. While the egg travels down one of the fallopian tubes, the hormone progesterone prepares the uterine lining to receive the egg if it has been fertilized by sperm. If the egg is not fertilized, or sometimes even if it is fertilized, the resulting embryo does not implant. Instead it dissolves or gets absorbed, estrogen and progesterone levels drop, and the uterine lining breaks down. The blood and tissue exit through the vagina, and the whole cycle starts again.

On average, women in the United States begin their periods around age 12 years, but anywhere from age 8 to16 years is normal. Periods continue until menopause, which usually occurs between the ages of 48 and 55 years. Women are said to be fully in menopause once they have not had a period for 1 year. Periods are often irregular for a few years, both after the first time a woman ever menstruates and at perimenopause—the time just before menopause occurs.

Stress, travel, lack of sleep, weight changes, and illness can all change your period timing or flow. If you miss a period for no reason, have a very heavy period, or bleed in between periods, it’s a good idea to see your health care provider. Women who have bleeding after menopause should always see their health care provider.

Debbie makes an appointment with her nurse practitioner (NP). Her NP asks when her periods first started, if they have ever been regular, if she is having sex and what birth control methods she has used, and if she has been trying to lose weight. Even though Debbie says she’s only had sex once, the NP recommends a pregnancy test. Pregnancy can cause unusual bleeding, and a pregnancy lodged in the fallopian tube rather than the uterus is dangerous. Pregnancy tests are inexpensive, quick, easy, and accurate; health care providers will recommend one when evaluating changes in periods. After a complete physical exam, including weight and height, blood pressure, and a pelvic exam, the NP asks Debbie to keep a menstrual calendar, writing down when she experiences bleeding. 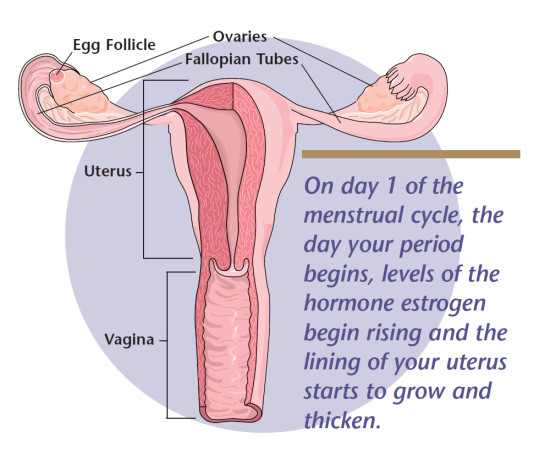 Marta sees her doctor who takes a health history as described above and does a physical exam. He asks her what days she notices the bleeding and if it occurs after sex. During the pelvic exam, he checks her cervix—the mouth of the uterus—for signs of infection or for skin tags called polyps. He also palpates (examines with his hands) her uterus, checking for firm, irregular shapes typical of noncancerous, uterine growths called fibroids. He advises an ultrasound to find irregularities of the uterus or ovaries he might not have felt.

LaToya sees her nurse midwife, who asks about her periods. She shows LaToya a picture chart to determine how heavily she bleeds, does a physical exam, pelvic exam, and pregnancy test, and orders an ultrasound. She also does blood tests to see if LaToya has anemia or a blood clotting problem. Although the midwife thinks the changes are probably due to perimenopause, she recommends LaToya see a gynecologist for an endometrial biopsy. In the office during a speculum examination, the gynecologist slides a thin tube through the cervix into the uterus and takes a sample of the uterine lining. LaToya has some cramping during the procedure, but it is over quickly. The sample is sent to a lab to check for any changes in the uterine lining that could later lead to cancer.

Hysterectomy — surgery to remove the uterus — is no longer the main treatment for AUB. Fibroids or polyps inside the uterus may be removed through a hysteroscope (a scope used to look at the cervix and uterus) inserted through the cervix. Large fibroids may be treated by blocking the artery that supplies blood to the uterus, or by surgery that removes the fibroids and leaves the uterus. For women who do not want any more children, the uterine lining can be destroyed with chemicals or heat.

Debbie’s irregular periods are probably due to anovulation. She decides to use birth control pills continuously and not have any periods for a while. Marta’s tests show nothing abnormal. Since she wants to get pregnant soon, she decides against any treatment. LaToya’s ultrasound shows some small fibroids. Since fibroids usually shrink after menopause, she decides to “wait it out.”

If you are experiencing bleeding that is different from your usual pattern, your health care provider will take a health history, including a detailed description of your bleeding. It helps if you bring a calendar showing the days you bleed. After a physical exam and sometimes additional testing, he or she will usually be able to determine what is causing the problem and offer you treatment choices.