What You Should Know About
Endometrial Ablation

At age 40 years, Takeesha dreads her monthly periods. For 3 days, she soaks through a super tampon and a pad in an hour or less. Sometimes she doesn’t want to leave the house because of the heavy bleeding. Usually energetic, she can no longer keep up with her work and her two young teenagers; by 8:00 PM she is ready for bed. Her mother and friends tell her she needs a hysterectomy. Takeesha decides it’s time to see her health care provider.

Takeesha’s health care provider takes a health history. She asks Takeesha about her periods now and in the past, and about any symptoms — fatigue, other unusual bleeding, weight loss or gain, or feeling hot or cold all the time—that might signal the bleeding has a medical cause. She explains to Takeesha that heavy menstrual bleeding, medically called menorrhagia, is a common problem. Some causes are hormonal changes, uterine fibroids (noncancerous tumors of the uterus), underactive thyroid gland, bleeding disorders, uterine polyps (small growths in the uterine lining), or excessive build-up of the uterine lining. Often, no explanation is found.

Takeesha’s health care provider performs a physical examination to check her general health and a pelvic examination to check her vagina, cervix, uterus, and ovaries. She inserts a thin, flexible tube into Takeesha’s uterus through the cervix and takes a sample of the uterine lining to detect any signs of a developing cancer. She orders blood tests to check for proper thyroid gland function and blood clotting, and to see if Takeesha is anemic (has a low blood count) from heavy bleeding. She orders a pelvic ultrasound to check the uterus and ovaries for abnormalities she could not see or feel during the examination.

While waiting for the test results, Takeesha’s health care provider advises her to take daily iron tablets because anemia from the heavy bleeding is probably the reason she is so tired; she also discusses options for controlling bleeding. Takeesha can use birth control methods containing the hormones estrogen and progesterone: pills, patches, or the vaginal ring. These methods thin the uterine lining, resulting in lighter bleeding. They can also be used without a break between packs to avoid bleeding altogether. With either cyclic or continuous use, women may have unpredictable light bleeding or spotting for a while, although the overall bleeding is much less. Women over age 35 years who smoke, or those with certain types of migraine headaches, blood clotting problems, high blood pressure, or some other medical problems cannot use these methods. The birth control injection, which contains only the hormone progesterone, may also control bleeding and can be used by women who cannot use combined methods.

Another choice is the progesterone-containing intrauterine system (IUS). This method also thins the uterine lining and may also cause spotting, especially in the first few months of use.

The blood tests and pelvic ultrasound show no reason for Takeesha’s bleeding. She is anemic and continues taking iron tablets. Although she originally started the contraceptive patch, she forgets to change it weekly
and decides to use the IUS instead.

Six months later, Takeesha is still having heavy periods. Although her blood count has improved with the iron tablets, she is still anemic. Takeesha realizes that the bleeding may get lighter without any treatment but could also continue for another 10 years, until menopause. Takeesha asks whether she really does need a hysterectomy. 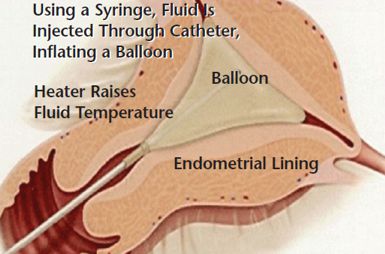 At one time hysterectomy—surgery to remove the uterus, requiring overnight hospital stays, general anesthetic, and lengthy recovery time—was the only way to treat heavy bleeding. Takeesha doesn’t want this surgery and is relieved to learn that there are other options. Her health care provider refers her to an obstetrician/gynecologist (OB/GYN) to discuss a procedure called endometrial ablation.

Endometrial ablation means treating the uterine lining with heat, cold, microwaves, radiowaves, chemicals, or laser so it becomes thin, scarred, and unable to build up and bleed. Like hysterectomy, the procedure cannot be used for women who may want children in the future, since a uterus with a normal lining is necessary for pregnancy. Unlike hysterectomy, endometrial ablation is usually done on an outpatient basis, without an overnight hospital stay. It can often be done without a general anesthetic, and return to work or usual activities is fairly quick. Endometrial ablation can be used for some women whose bleeding is caused by fibroids, as well as women with other causes of bleeding. It is not used when cancer of the uterine lining is suspected or known.

There are fewer complications from endometrial ablation than from hysterectomy. Althoughcomplications are uncommon, some can be serious. The most detrimental is tearing or puncturing the wall of the uterus, causing internal bleeding and intestinal damage. The heat, cold, energy waves, or laser can cause injuries, as well as the solution the doctor puts inside the uterus to stretch it during the procedure. Consequently, endometritis, an infection of the uterine lining, can occur. Takeesha’s OB/GYN explains the possible complications carefully
and answers her questions so she can make an informed decision.

Endometrial ablation does not always solve the bleeding problem. Many women have no periods at all after the procedure; but some women continue to bleed. Heavy bleeding may reoccur years later. In most studies, however, more than half of all women are satisfied with the improvement in their bleeding.

Takeesha decides to have the endometrial ablation. She is glad that she got the information she needed, and that there are choices other than hysterectomy to help control the bleeding.

There are choices for women who experience excessive menstrual bleeding. For many, the bleeding resolves on its own or, if menopause is only a few years away, it can be “waited out.” Some women are able to control the bleeding with hormonal contraceptives. If these cannot be used or do not work, endometrial ablation may be an alternative to hysterectomy.