What You Should Know About
Fibroids

Fibroids are very common—as many as three out of four women may have them during their childbearing years. In general, most of these women do not even know they have fibroids unless the doctor finds them during a gynecological exam.

Fibroids can be a nuisance, and in some cases they can make daily life difficult, but they are not life-threatening. It is important to know that although fibroids are called tumors or masses, they are not cancer.

Fibroids are bundles of smooth muscle cells that organize into a firm mass, usually in or on the wall of the uterus, but sometimes in the uterine cavity or womb. Fibroids can be very tiny or large enough to distort the uterus. It is possible to have more than one fibroid at a time, in different parts of the uterus.

How do you get fibroids?

No one knows yet, but there are some possible explanations. One is that a mutated (altered) gene is responsible. We do know that fibroids thrive on the estrogen that is naturally made by a woman’s body during her reproductive years. Some experts have suggested that the real cause could be a combination of genetic, hormonal, and environmental factors.

How do I know if I have fibroids?

Chances are, you will not know—fibroids do not always cause symptoms. When they do, one of the most common symptoms is heavy menstrual bleeding. Other symptoms are: 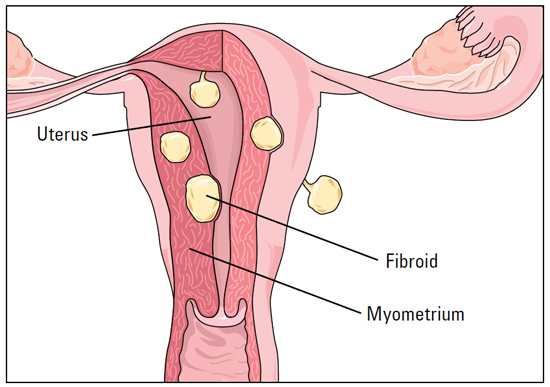 Who is most likely to get fibroids?

If your mother or other close female relative has had fibroids, your risk of getting them is higher. Obesity may also increase your risk. Women who have given birth may have a lower risk for fibroids.

When should I see my doctor?

See your doctor if you have:

If my doctor finds fibroids, what happens next?

First, to make sure, your doctor may suggest an ultrasound. This is a painless exam that uses sound waves to take a picture of your uterus. It helps the doctor measure any fibroids that are found and to determine their exact location. The ultrasound will be either transabdominal or transvaginal. Transabdominal means the technician moves the device over your abdomen. Transvaginal means the technician places the ultrasound device in your vagina. While the transvaginal ultrasound provides more detail because the device can get closer to the uterus, if the fibroids are quite large, they may be better seen transabdominally.

Other ways your doctor can get a picture of what fibroids are:

What is the treatment for fibroids?

Most of the time, no treatment is needed. If the fibroids cause problematic periods, your physician may prescribe medicine to help. If a medical solution does not work, your doctor may suggest surgery. Myomectomy, which can be done in a number of ways, removes the fibroids but leaves your uterus alone. You can still have children, but the fibroids may come back. Minimally invasive methods such as laparoscopy and

hysteroscopy can also be used. Robotic surgery is being used for very large fibroids that used to require an abdominal hysterectomy. Hysterectomy, the only way to cure fibroids permanently, is major surgery and, because your uterus is removed, you will not be able to bear children. Some women may be candidates for uterine fibroid embolization, a treatment that cuts off the blood supply to the fibroids.

Is there any reason to worry about fibroids?

In general fibroids will not interfere with fertility or pregnancy. It is important to discuss your fibroids with your physician as part of preconception counseling, just to make sure that there is no reason for concern. A much more common problem is pain when you are pregnant, usually between the first and second trimesters. The pain is usually controlled with pain relievers but in some cases may be persistent if the fibroids are growing during the pregnancy. When you are not pregnant, fibroids tend to grow slowly. Because fibroids depend on hormones to grow, they may shrink somewhat after menopause when your levels of estrogen drop.